Violet Cormier and her husband, Ken Cormier, built Funtown Splashtown USA from the ground up.

It started as a drive-in food stand called Marvel Drive-In in 1960 on U.S. Route 1 in Saco, Maine. It is now home to the park with 50 rides, water slides, pools, and various games and food. Ken Cormier passed away in 2013, but Violet Cormier continues to be a very active part of Funtown Splashtown, USA. Even at 87, Violet Cormier shows no signs of slowing down. Her motto is ‘Treat every day like it’s a party. 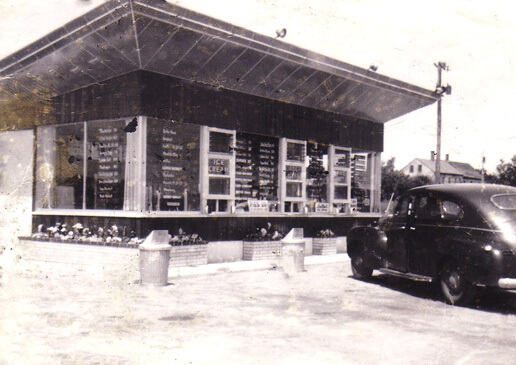 Kenneth and Violet Cormier opened the Marvel Drive-In on U.S. Route 1 in Saco, Maine. The Cormier’s opened this drive-in restaurant next to Kenneth’s brother-in-law, Andre Dallaire’s, mini-golf course that opened in 1959. 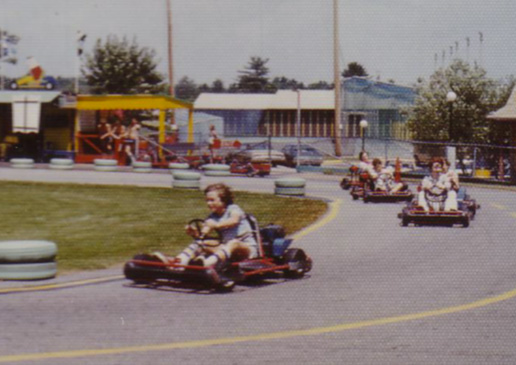 Dallaire opened a Go-Kart track behind the mini-golf course. Cormier added batting cages as well as an archery range behind the Marvel Drive In. Over the course of the next few years, Cormier and Dallaire added several kiddie and carnival-style rides. This included the SkySlides, Swinging Gyms, as well as a gift shop. Funtown USA unveiled its first themed attraction with the Astrosphere, a Scrambler darkride. The Tilt-A-Whirl was also added to the lineup of rides this same year. After legal battles about protesting the new addition, the Galaxi Coaster was brought to Funtown. At this time it was the only roller coaster in the whole state.

A 500-seat theater was built at Funtown to house the “Galactic Laser Experience”. This attraction consisted of a laser-light show that was set to popular music of the time. Due to technical problems with the attraction and bankruptcy of the company the show was purchased from, the theater was closed. The lobby of the building is now an arcade, and the rest of the building is used as storage. Antique Cars was added to the park’s lineup, and for the first time at Funtown bracelets were sold to guests for unlimited riding.

Tempest in the Tea Cups 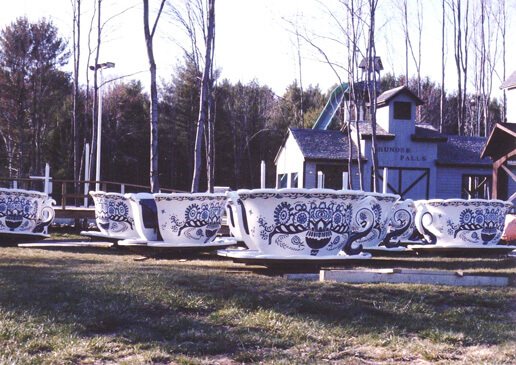 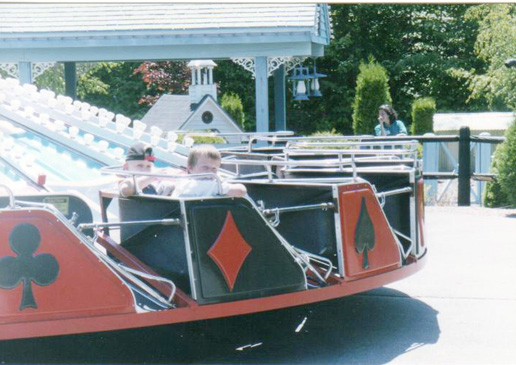 During the late 1980’s, Funtown added many thrill rides, including the Flying Trapeze (YoYo), Sea Dragon, Casino, and the Thunderbolt.

Cascade Water and Amusement Park opened the Haunted Mansion. This was an extremely popular attraction, it was closed in 1996 due to the high-risk of operation. Funtown Splashtown USA announced the largest ever expansion with the arrival of the Excalibur. This was the first wooden coaster in Maine in over 50 years. Excalibur is the tallest and longest wooden roller coaster in Northern New England. This coaster was highly praised and had rave reviews. Excalibur was rated #10 in the world for wooden roller coasters by the Amusement Business Magazine. The following year, three of the six water slides in Splashtown USA were replaced and a large kiddie play area was added to the park.

The park brought in live entertainment when the Picadilly Corner Stage opened. Following the 2000 season, the park announced that it would be closing the Hydrofighter, Ferris Wheel, and Noah Zark Play Area to make way for the 220-foot tall Dragon’s Descent, a turbo drop ride. The Frog Hopper, a kiddie version of the Dragon’s Descent was also added.

Funtown Splashtown USA celebrated its 40th season! The park announced its largest expansion and renovation project ever! This included two 7-story tall water slides to open in June 2007. The new slides replaced the mini golf course. The Hungry Bear as well as Sweet Shoppe were renovated to serve guests in the water park.

The Park Doubled in Size! 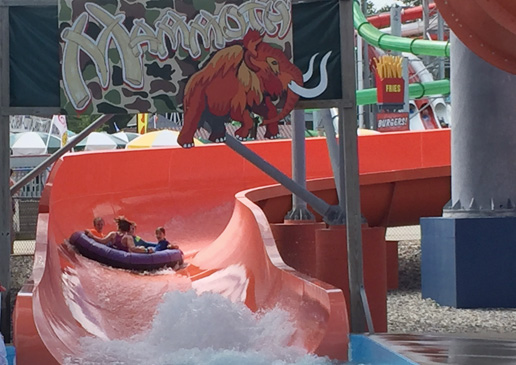 Splashtown USA doubled in size. The park also opened the Mammoth and Tornado water slides. The Tornado is exclusive to our park in Northern New England! The park opened its first redemption arcade, The Dragon’s Lair. The Galaxi Coaster, a mainstay at the park for 30 years, was replaced with the Wild Mouse. This new coaster is the largest family-steel coaster in Maine. Funtown USA celebrated its 50th season! Returning to the park for this historic season is one of the park’s original rides, the Merry-Go-Round. This classic is located adjacent to the Heritage House of Gifts, not far from its original home.

Funtown USA completely refurbished the Astrosphere attraction with a new dome made out of concrete. The light and sound show was also upgraded to include new video projectors that brought back many of the original photo slides.